Originally, the mine in Oberhausen-Sterkrade was not planned as a mine. No. When sinking work of shaft 1 started in 1897, the aim was to install a ventilation shaft for the Osterfeld hard coal mine.

At the same time, the new shaft should serve as a second mobile exit for the Hugo-Haniel mine. But then everything turned out differently: The first shaft collapsed at the Hugo mine. Top management consequently decided to start production at Sterkrade, and began regular coal mining in 1903. The headframe over shaft 1 also originates from this period. Today, it is a guardian over the former mining site and is one of the last preserved testimonies of Sterkrade mine.

There are several things that make the one-storied single trestle of the construction type Promnitz 3 a proud monument: The object is one of the very few preserved three-legged Promnitz constructions in North Rhine-Westphalia. In parallel, it is also one of the oldest so-called German hammer head towers in NRW. It was erected in half-timbered construction and could take up four adjacent rope sheaves. Two of these sheaves have been preserved. 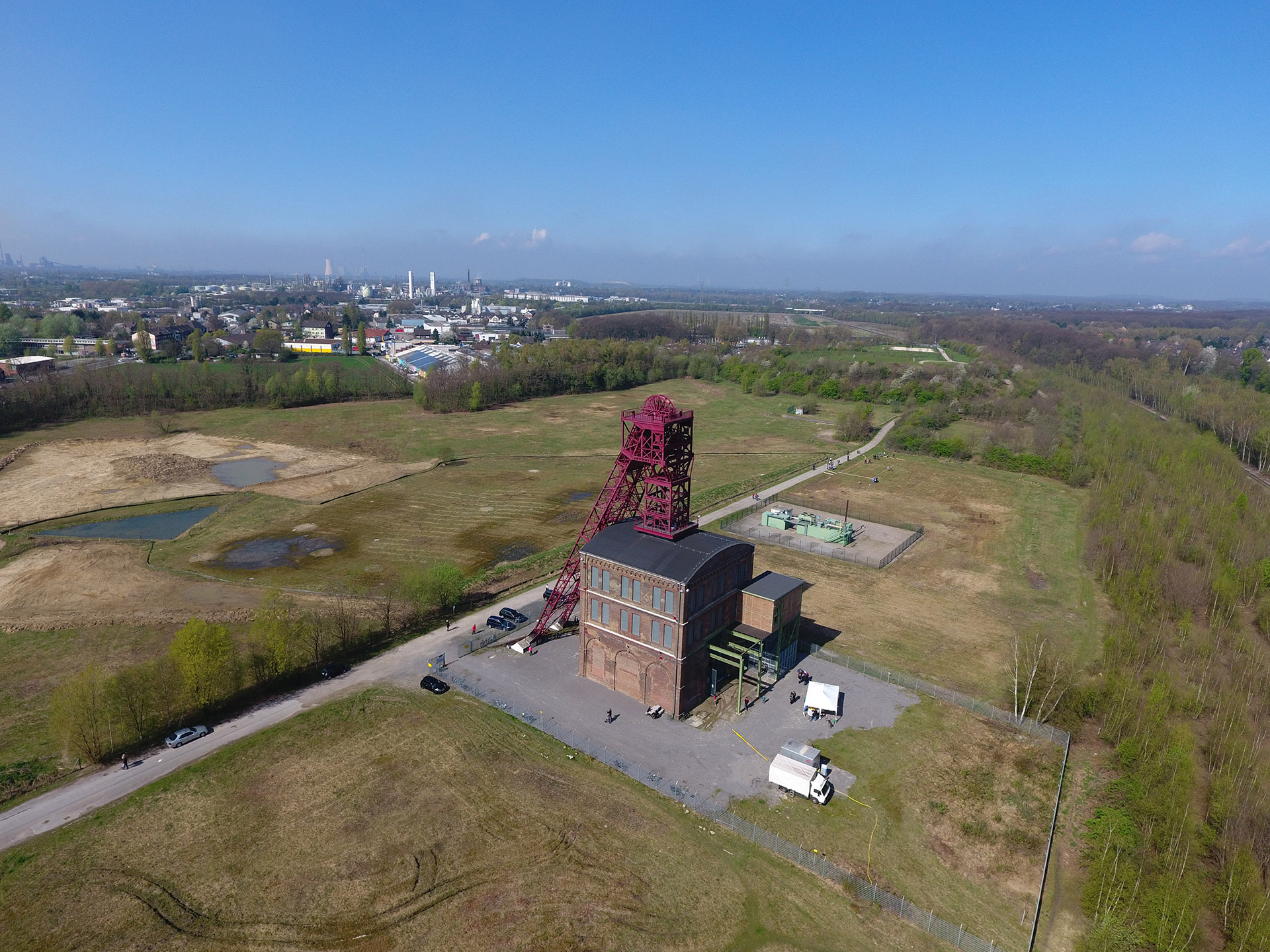 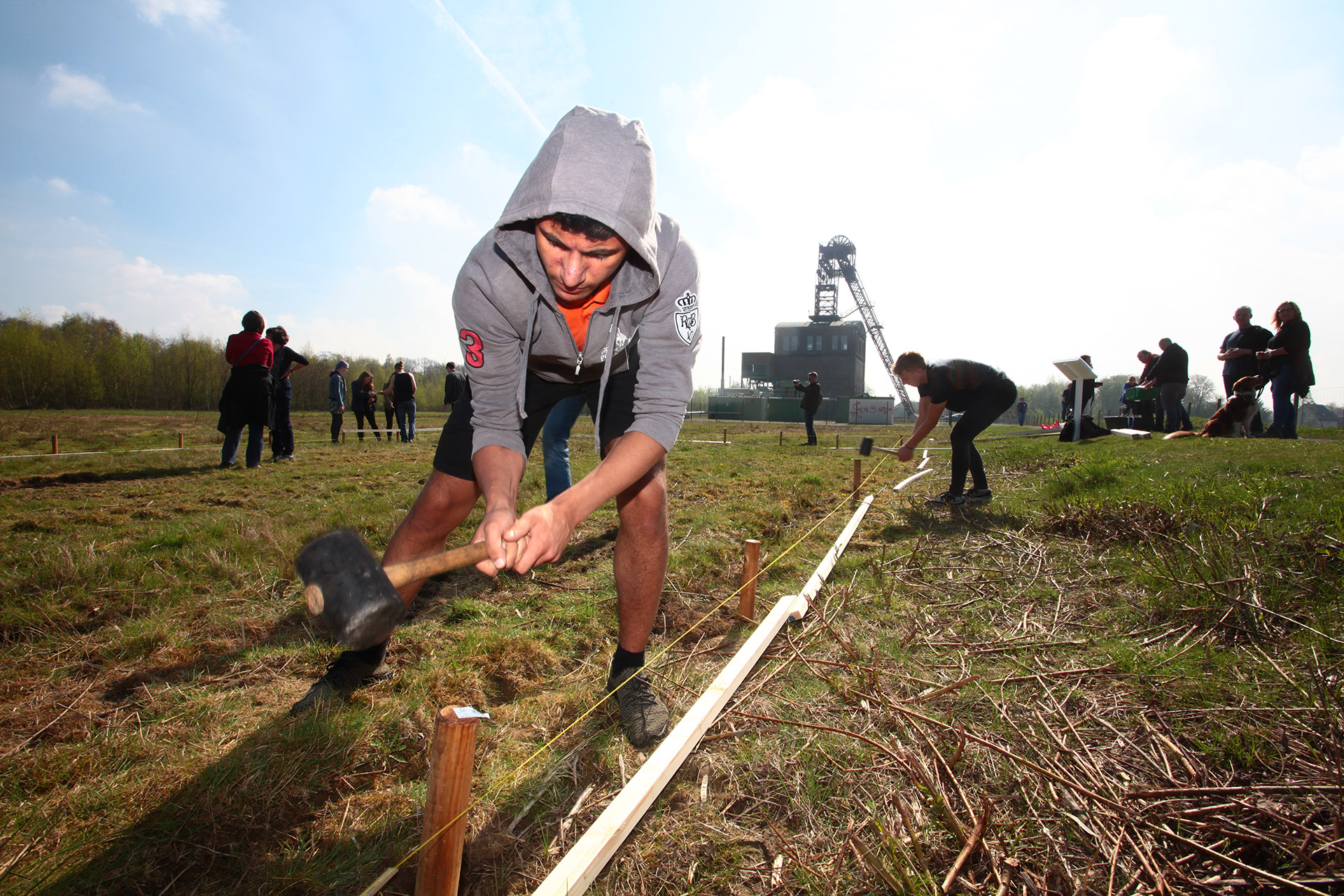 Analyses during renovation work in the years from 2012 to 2015 have confirmed the striking red as the structure’s original color shade. The restorers strictly adhered to these results and they created the structure’s new color scheme based on the historical findings.

It appears as if the headframe didn’t have enough room in the shaft hall so that it was forced to stretch itself through the roof. This doesn’t seem to bother the hall very much at all: The massive three-story brick building from 1903 majestically stands in the middle of the landscape that was reclaimed by nature. The building presents itself in historical style. At the bottom floor level, the facades stand out with round-arched blind arcades. The first and second floors have high rectangular twin windows with metal glazing bars. In the period from 2012 to 2015, the Foundation for the Preservation of Industrial Monuments renovated the plant, seamlessly interlinking it with the look of the days gone by.

The metallurgical plant Gutehoffnungshütte (GHH), that not only set up the plant in Oberhausen-Sterkrade, but also the hard coal mines Hugo and Vondern, was in charge of the mine. The last-mentioned mines were created in 1895 or 1898. After making the decision to use Sterkrade as a mine, GHH began to erect various open-cast mines which they were able to mostly complete by 1903. A coal washing plant, an electrical supply station and a coking plant were added.

This development had consequences: In 1933, Osterfeld mine took over Sterkrade mine’s coal production, and GHH’s top management quickly reconverted shaft 1. From then on, it was only used for ventilation, for transport in lift cages and materials haulage. As a result, the decision was taken to demolish the processing facilities and parts of the coking plant. In 1989, Osterfeld mine merged with Lohberg mine. Five years later, management finally discontinued the above-ground operations existing until then at Sterkrade I/II and had shaft 1 backfilled.

In 1995, the Foundation for the Preservation of Industrial Monuments took over the care of Sterkrade mine’s shaft 1, therefore safeguarding the headframe and shaft hall against demolition. Eight years later, the objects found their way into the City of Oberhausen’s list of monuments.

A visit to Sterkrade mine can easily be combined with a bicycle tour. That’s because the site is connected with the historical HOAG-Güterbahnstraße, which is open to walkers and cyclists. By the way, the name of the street is taken from steel mill Hüttenwerk Oberhausen Aktiengesellschaft – abbreviated: HOAG. During tours at Sterkrade, visitors have the chance to explore the plant in more depth or experience it in a new light during temporary events. However, complete development of the site is still pending. The history workshop (Geschichtswerkstatt) Oberhausen is also breathing new life into the former mine, especially by continually organizing events and activities in cooperation with young people.

Refurbishment of shaft building
and headframe