Malakoff tower over shaft 2 stretches upwards with a substantial height of 30 meters. Malakoff towers are named after the early, stone-built conveyors of a section of the Sewastopol fortress that was considered as unassailable – until the Crimean War (1853-56).

But its imposing size is not the only thing that makes the building extraordinary: The tower is interlinked with a headframe, and is therefore regarded as a special technical-historical feature. That’s because there is no other second plant in the Ruhr region that houses a preserved ensemble of a Malakoff tower and headframe. The building with a height of 30 meters was erected between 1874 and 1875. The historicism style and richly articulated facades still amaze visitors today. The constructors built the two-story single trestle in solid wall design

We’re writing the year 1856. While the remains of the renowned prehistoric humans came to light during quarrying in Neandertal by Düsseldorf, sinking work on shaft 1 of Proper I pit in Batenbrock to the west of Bottrop began.

But anticipated treasures of the soil are richly abundant. Extraction of hard coal started in 1863. From 1871, shaft 2 of the subsequent Prosper II pit was built. As a result, the master buildings erected the remarkable Malakoff tower between 1874 and 1875, that can start its work in 1875. 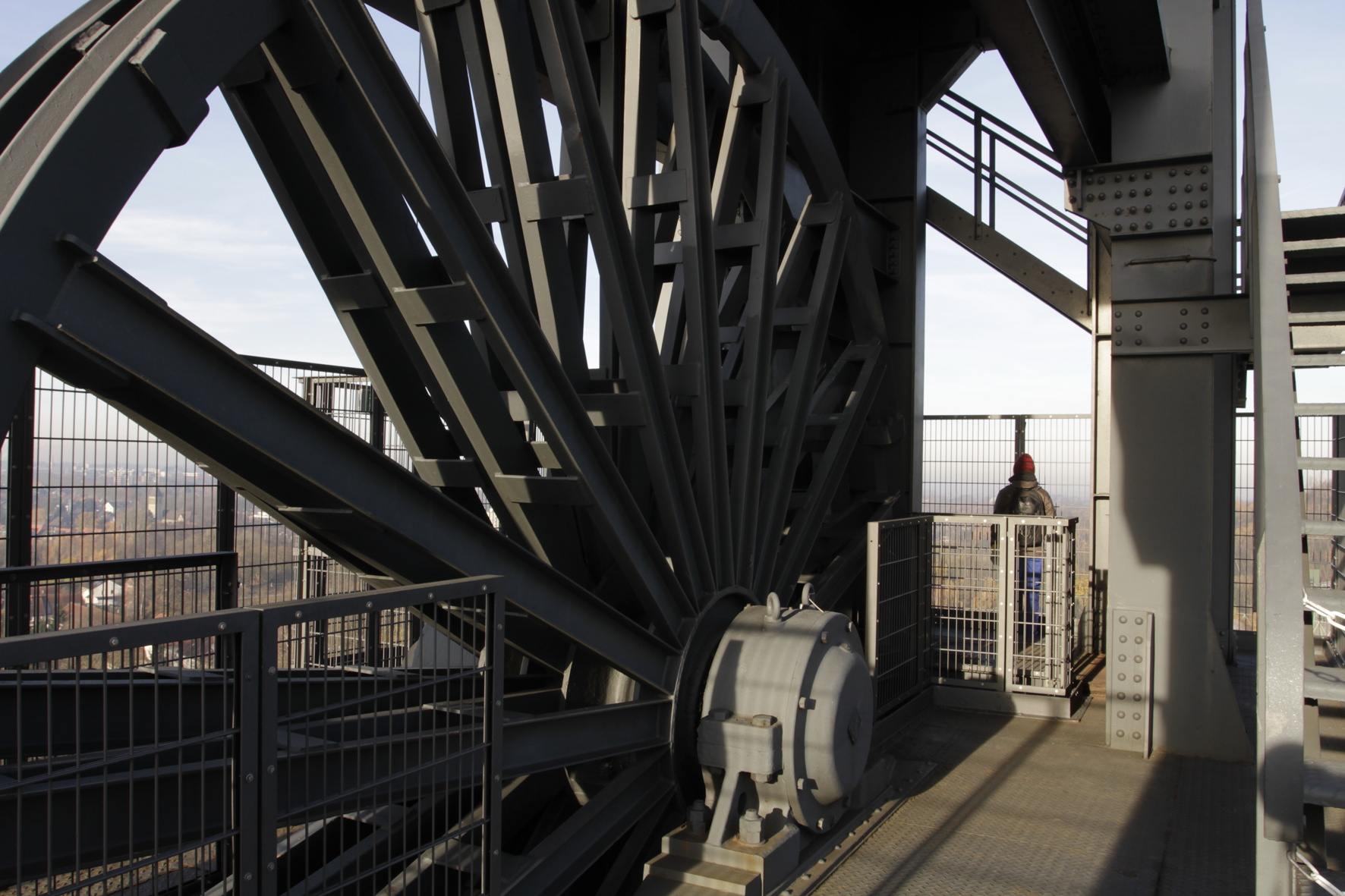 Those in charge continually expanded the plants. For example, a headframe in half-timbered construction was erected in 1896 on the stone-built shaft tower. In the period from 1933/34, it was replaced by a stand-alone headframe in solid wall construction that was no longer interlinked with the stonewalled shaft tower. In the years 1958/59, further improvement took place in the form of a second hoisting sheave platform.

Consolidation of the mines Prosper and Jacobi/Franz Haniel into the combined works Prosper-Haniel in 1974 marked the end of work at Prosper II. The persons in charge discontinued coal extraction. In 1987, pit 2 was backfilled.

It was entered in the list of monuments in 1984. Three years later, the headframe was also included in the listed buildings of historical interest. Since 1988, the two buildings are protected as an architectural monument and since 2004, they belong to the inventory of the Foundation for the Preservation of Industrial Monuments, which succeeded in safeguarding the treasured industrial monument against demolition. 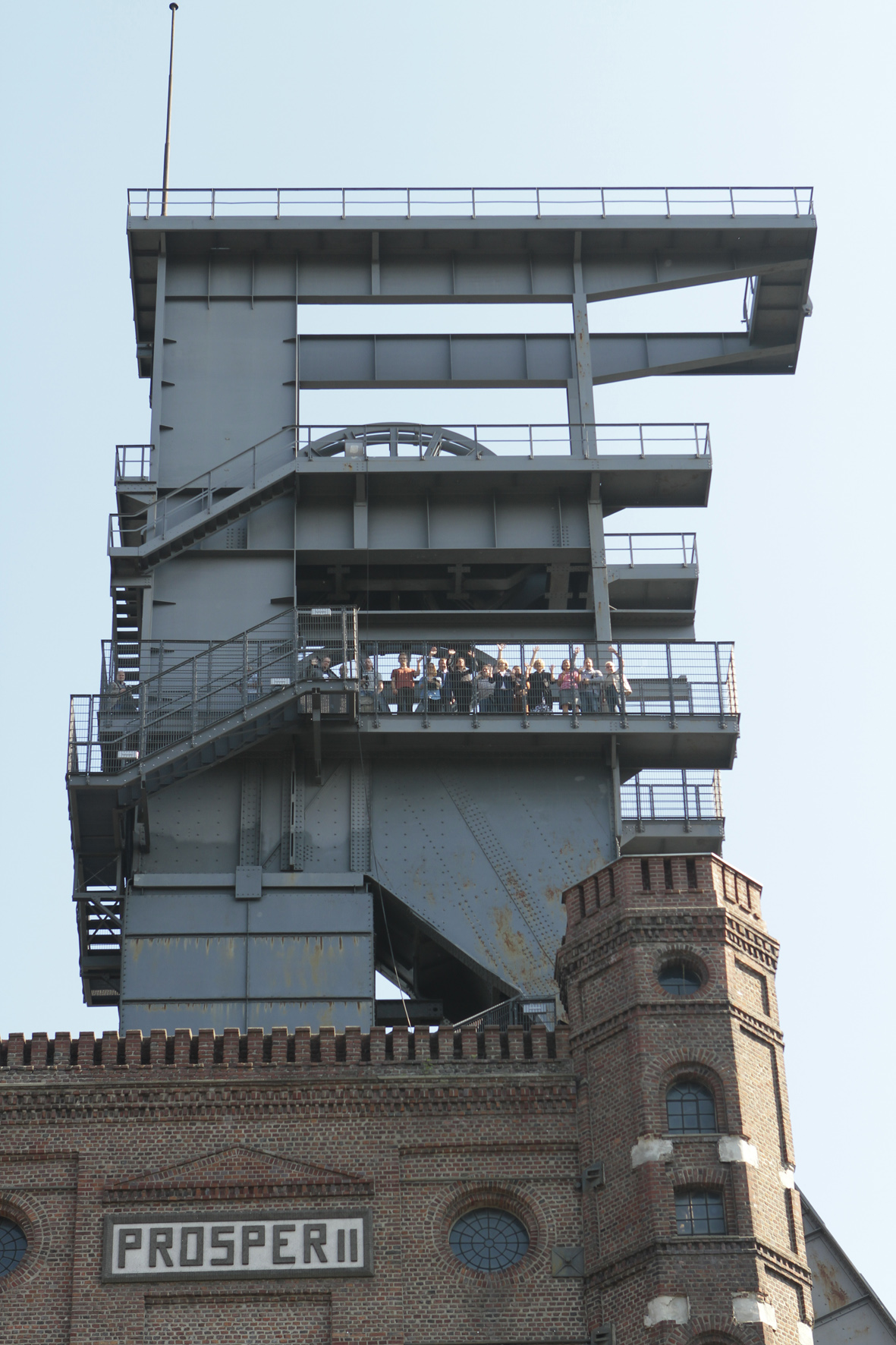 A bride in white, a climber without any fear of heights and right in the middle, numerous visitors – today, Malakoff tower is a place filled with a wide variety of adventures. It offers a non-commercial climbing facility of the association Bottrop Sportbund, and also serves the City of Bottrop: Couples in love therefore have the opportunity to say the magic word yes in a civil marriage against a historical backdrop. Since 2014, the headframe has an observation platform, giving visitors a sensational view over the former coal region. That’s because during the Foundation for the Preservation of Industrial Monuments’ tours, people can climb up the headframe and tour the Malakoff tower. The structure with a height of 30 meters is maintained by the Historische Gesellschaft Bottrop e.V. The association has set up a place there for mining and migration history – and makes sure that the mine’s moving history stays in collective memory.

Conversion of Malakoff tower
Refurbishment of roof and walls

Erection of an observation platform