A bell hammer and a kind of chisel – or simply: hammer and pick. These were once the most important tools in mining. So it’s no surprise they were already used in the 16th century as the miners’ coat of arms.

They were also one of the most frequently used symbols in the coal and steel industry. The same holds true for Schlägel und Eisen mine in Herten: Here as well, you can still discover the famous symbol in many places. And this is especially also because many of the plant’s buildings have remained preserved. Those which could be used economically were privatized, whereas the headframes and machine building were transferred to the ownership of the Foundation for the Preservation of Industrial Monuments, and were therefore safeguarded against demolition.

The headframe juts out a stunning 64 meters over shaft 4, sending a signal to visitors from afar: Great things are waiting for you at this site. The plant was built in the years from 1984/85 and belongs to the type of welded box-frame constructions. These found their way into the mining industry starting from the end of the 1950s.

Its five-pronged ropeway – a technology only used very infrequently in mining. The 64-meter high system represents the last development phase of rope supporting structures in the Ruhr region, and is one of the few well-preserved representatives of this young type of construction. 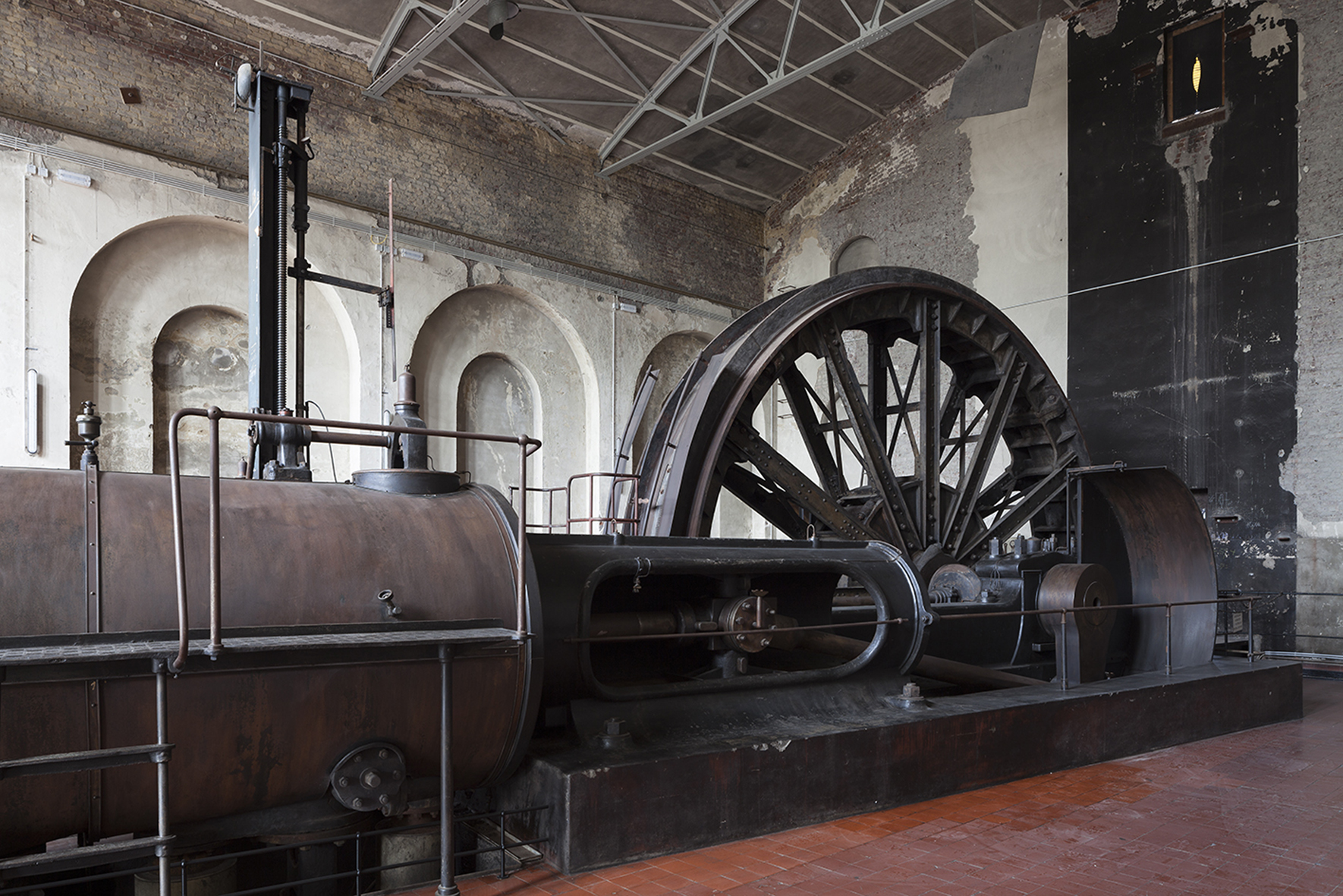 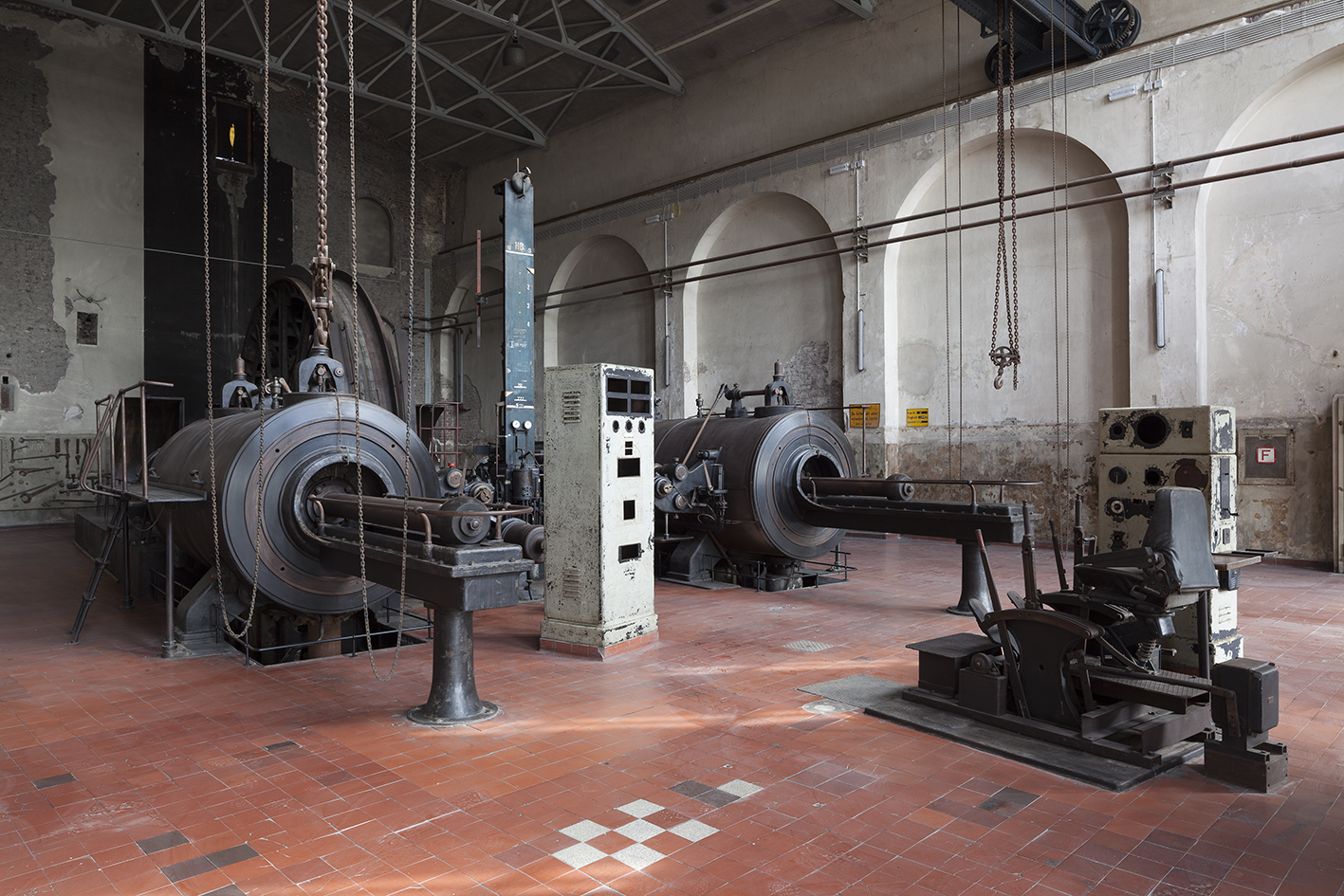 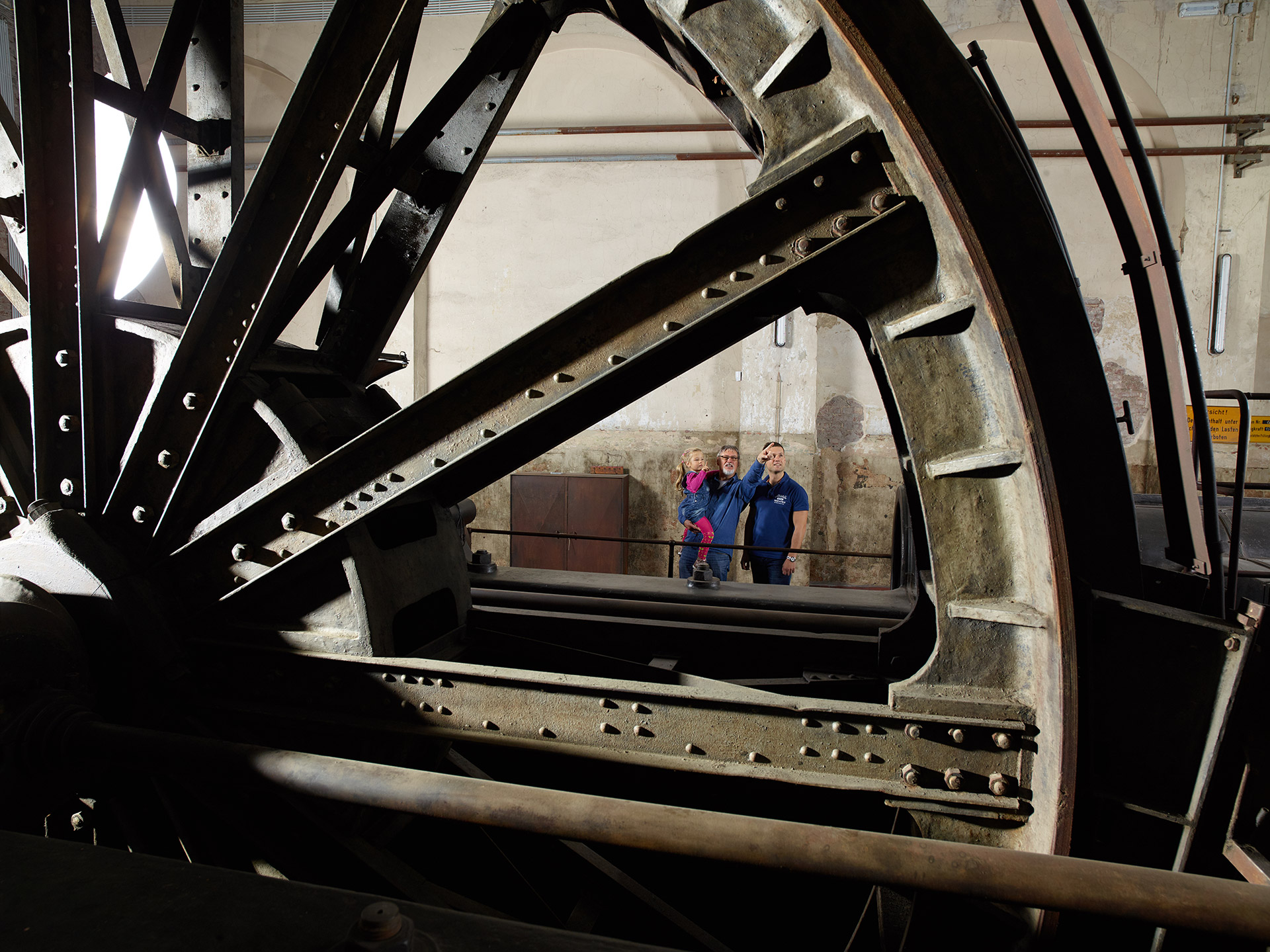 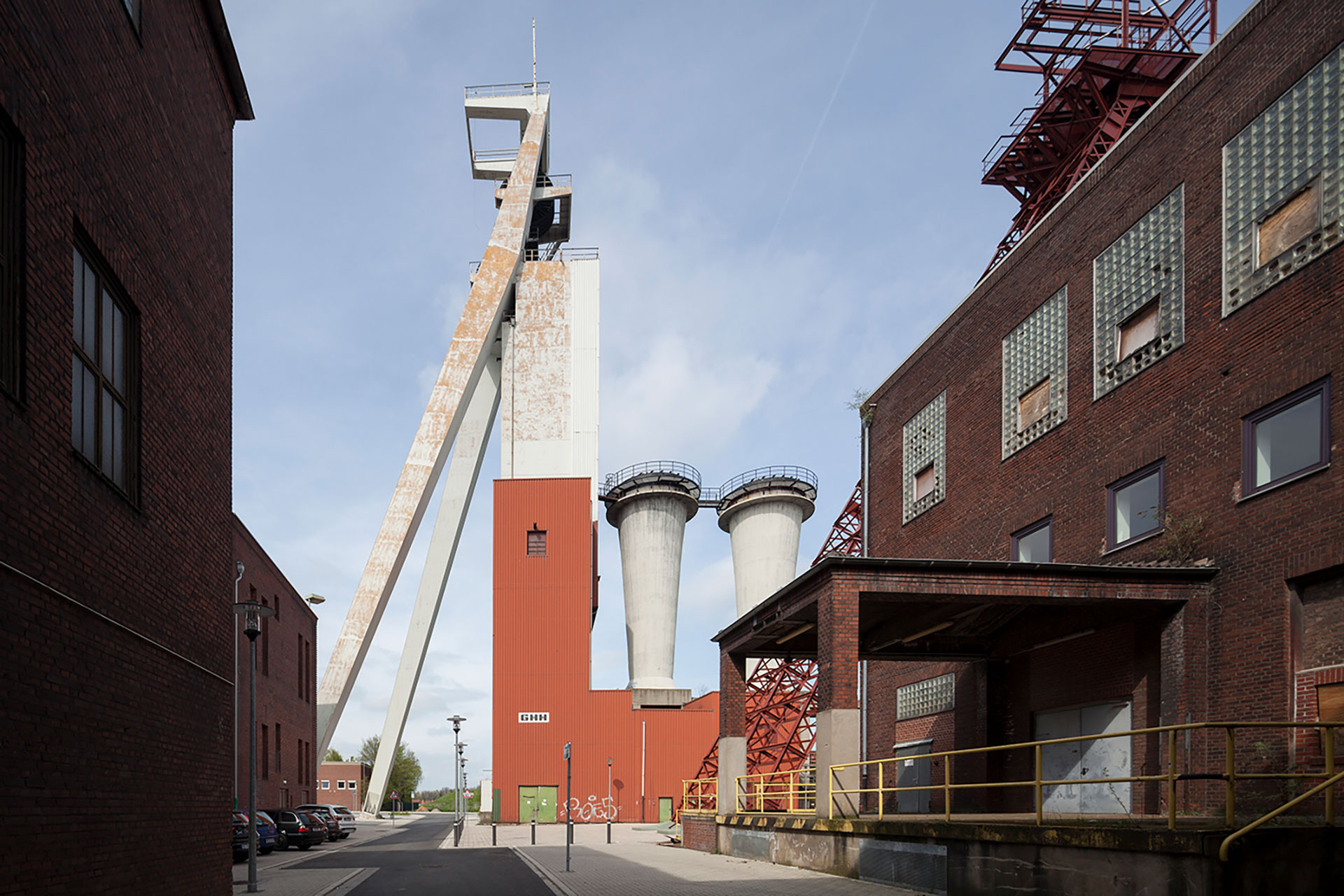 Werner Gellhorn also designed the adjacent machine building in the historicism style. Inside, visitors can take a closer look at a twin steam-driven winding machine from 1897. Half of the machine house served as a pithead bath as of 1951. At that time, the building’s historical facade was completely reshaped and adapted to the remaining open-cast mines from the 1930s and 1940s. Inside of the building’s southern section, things look different: the original architectonic design was maintained there. Alongside the hoisting machine, you can also gaze in wonder at the rest of the original wall paintings, which were unveiled and lovingly restored by a conservator.

In the years 1972/73, shafts 3 and 4 obtained a new extendable pit ventilation system for mine ventilation. The system still exists today.

Schlägel & Eisen mine’s history began in 1873 with the foundation of a company to construct a hard coal mine in Herten. The entrepreneurs didn’t waste any time and started a year later with sinking work for shaft 1 in today’s city district of Disteln. The mine produced the first coal in 1877. Expectations were able to be met and the mine continually developed itself further. From 1890, shaft 2 and from 1895 shaft 3 were therefore created in the southwest mining area in the city district of Langenbochum. Production there started in 1892 or 1897.

A period of revival followed the successful start: In 1898, Schlägel & Eisen mine was transferred to the ownership of the mining company Hibernia. With tremendous enthusiasm, the new owners started to expand the plant and had three new shafts sunk in the period from 1898 to 1900. In 1902, shaft 4 started up operations as a ventilation shaft. Three years later, the mine achieved a proud annual output of nearly one million tons of coal. As of 1937, the mine’s top management gave the go-ahead for sinking work for shaft 7, which served as the newer central hoisting shaft from 1941.

At the end of the 1960s, the newly founded Ruhrkohle AG took over the mine and drove it to new peak performances in the following years. In 1975, the mine therefore realized the maximum annual output of its history: 2.03 million tons. A low point was reached seven years later – in a positive sense: Those in charge began to drill down deeper at shaft 4 with an extended cross-section, and started up its operations in 1986 as the central hoisting shaft.

1990 heralded the decommissioning of Schlägel & Eisen mine, which should still be prolonged up into 2000: Consolidation with Ewald mine took place, which acquired the central production of coal. What remained at Schlägel & Eisen were lift cages to bring material and miners underground and back to the surface again. Another merger took place in 1997 – namely with the amalgamated mine Hugo/Consolidation with the Ewald/Hugo group. The last production of these combined mines was in April 2000, so that this date marked the final shutdown of Schlägel & Eisen. 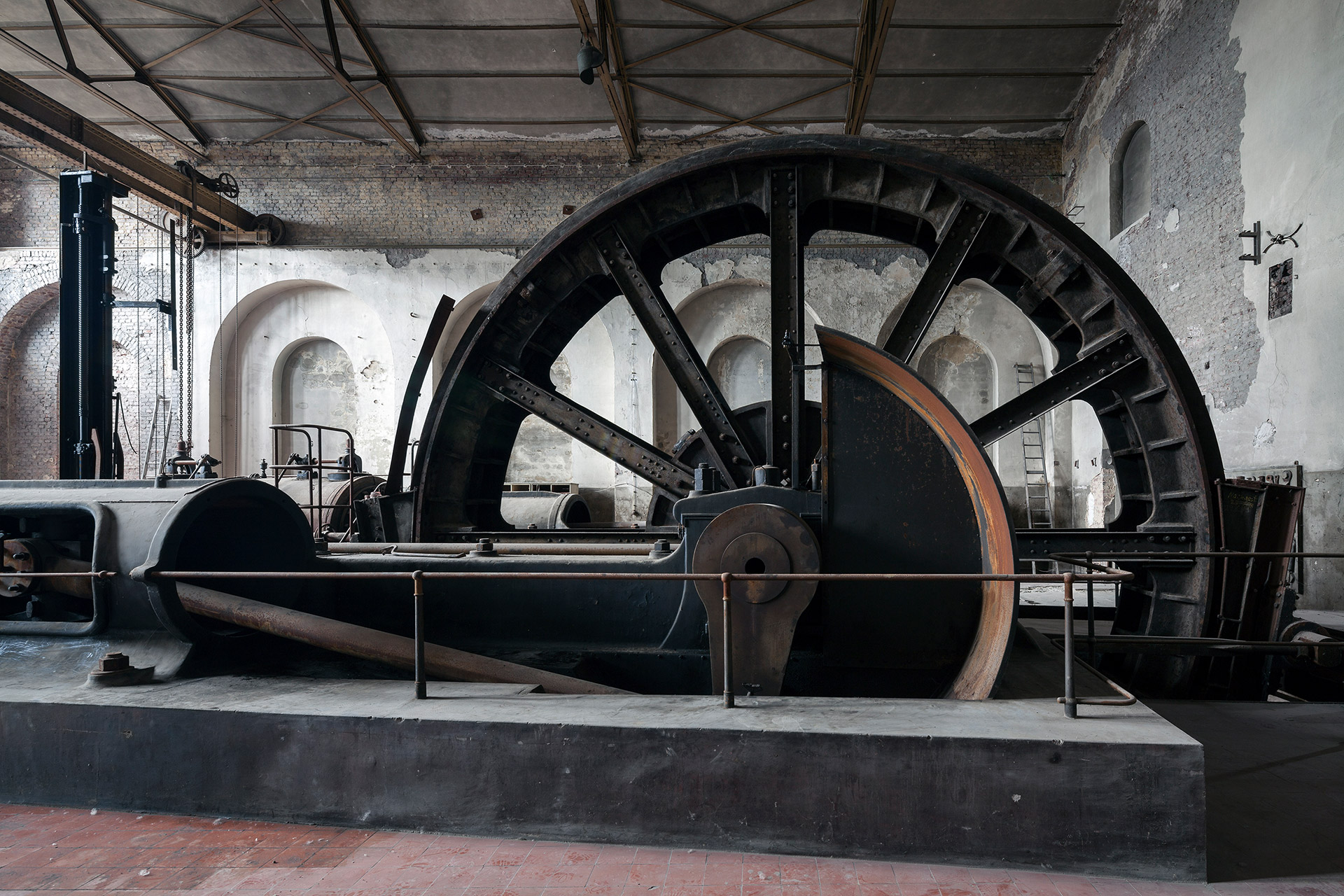 Since May 2017, visitors can see the monument site during tours. In the process, they get exciting insights into the machine building’s interior and have the opportunity to explore the historical equipment. But that’s by far not everything: Temporarily, breathtaking events are held on the mine’s premises – including events during the Night of Industrial Culture, better known as ExtraSchicht. Following completion of refurbishment work, the Foundation plans on illuminating the headframes, and in cooperation with the Geschichtskreis Schlägel und Eisen Herten e. V. and the association Schlägel und Eisen e.V., on revitalizing the machine hall with a varied program of events.