In the energy industry, this man is considered as a visionary: Professor Arthur Koepchen. The former member of the executive board of Rheinisch-Westfälischen Elektrizitätswerke (RWE) created a quantum leap in the electricity sector with his ground-breaking ideas.

As member of RWE’s technical executive board, he was the one who set decisive impulses for the construction of the pumped-storage power plant in Herdecke (Ruhr) – and became the eponym for the plant. Koepchenwerk was created in the years from 1927 to 1930. It ensured the generation of electrical energy through hydropower and improved utilization and profitability of coal-fired power plants as part of a trans-regional integrated grid.

The industry’s continuous growth led to an insatiable hunger for energy and presented the electricity sector with gigantic tasks. It was an immense challenge for energy suppliers to provide enough electricity for the industry during peak times. Arthur Koepchen saw the solution to safeguard stable and cost-efficient energy supply in the establishment of a trans-regional, greater area integrated grid. The engineer paved the way for this idea and took the energy industry into a new era. RWE relied on the connection of lignite from the Rhineland and Alpine hydropower, and created the first German North-South high-voltage line.

It stretched from the Rhineland down to Bavaria to end in Vorarlberg in Austria. Here, the lake Hengsteysee offered ideal framework conditions for the construction of the planned pumped-storage power plant. The work that should bear the name of Arthur Koepchen. 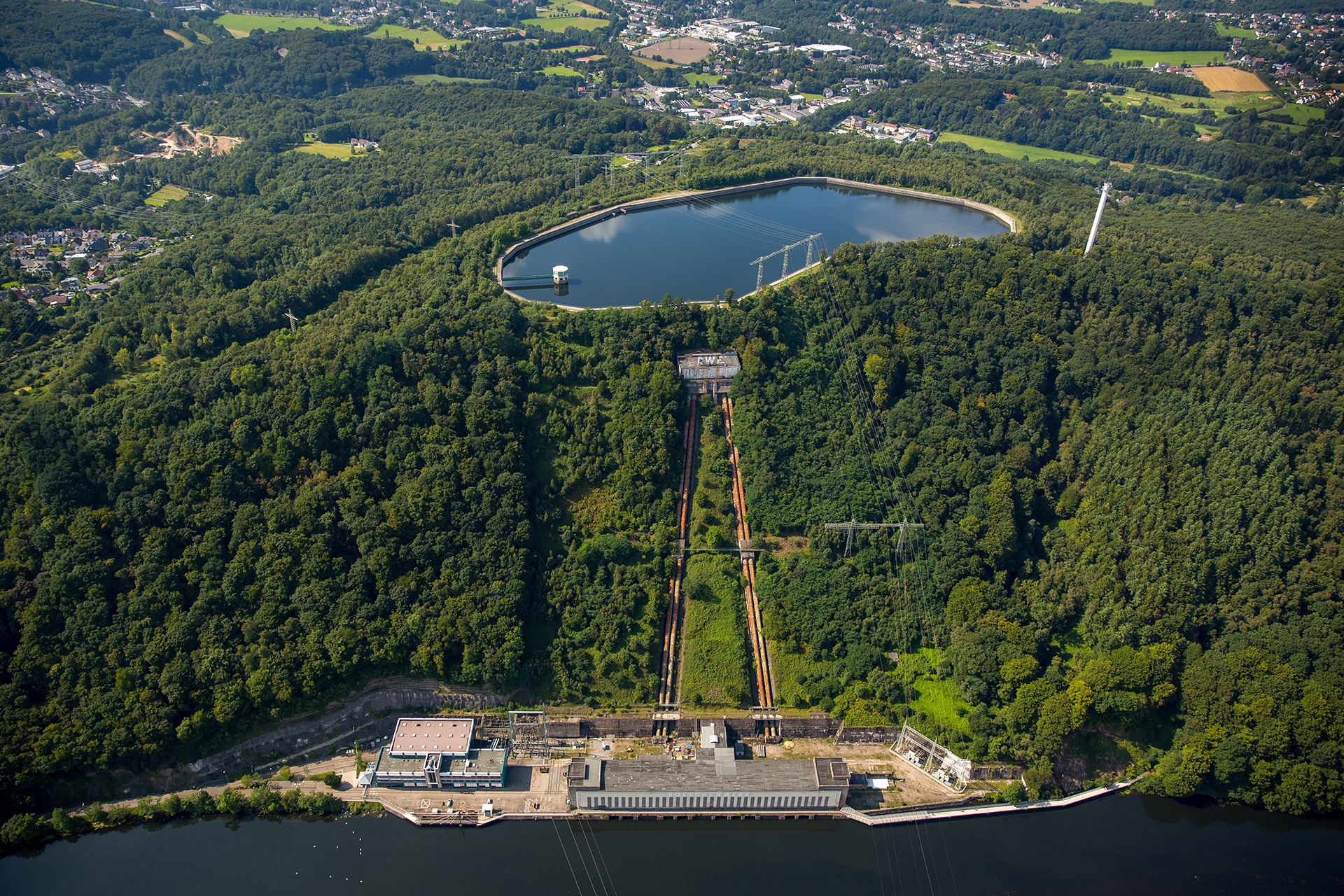 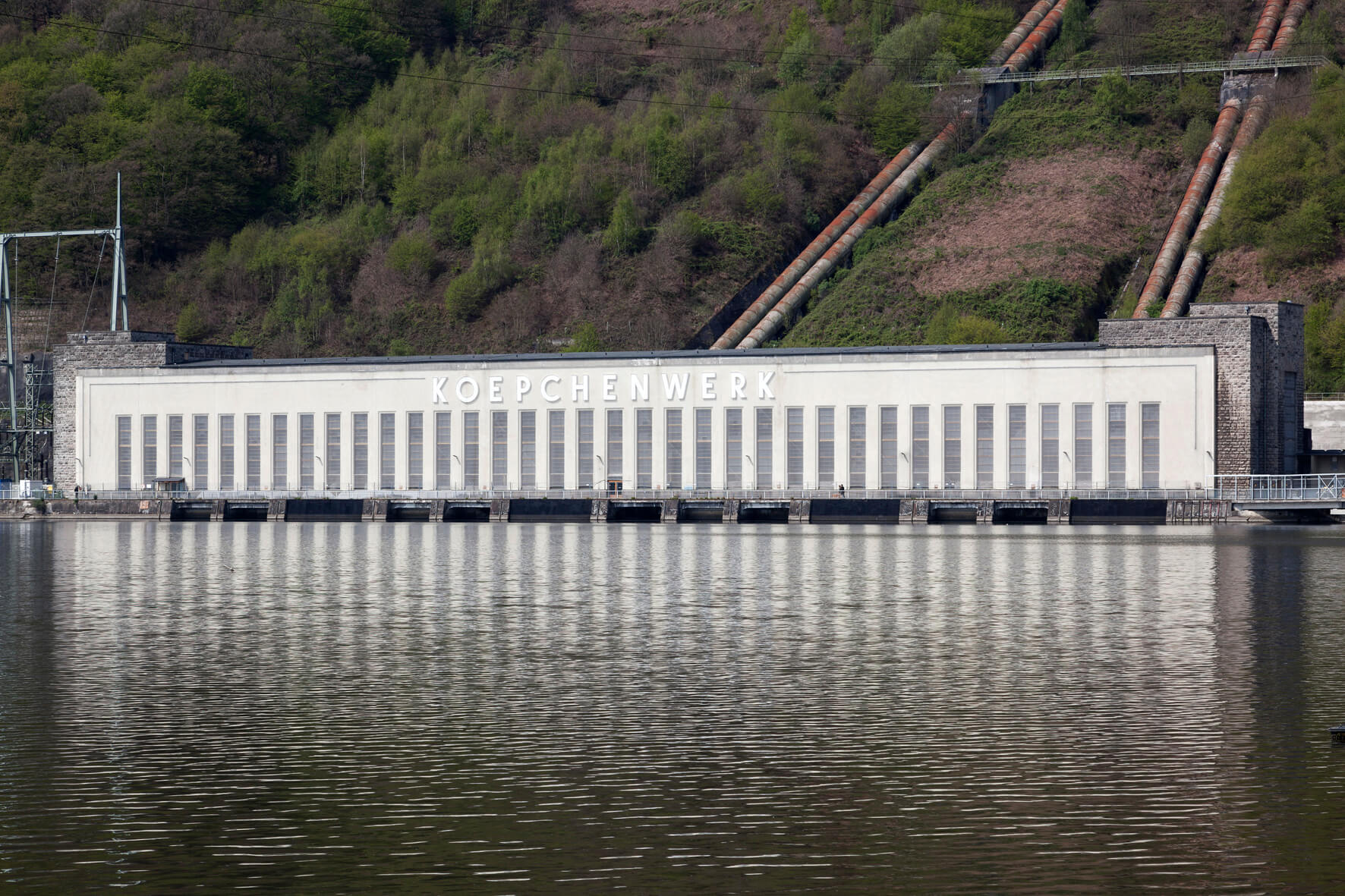 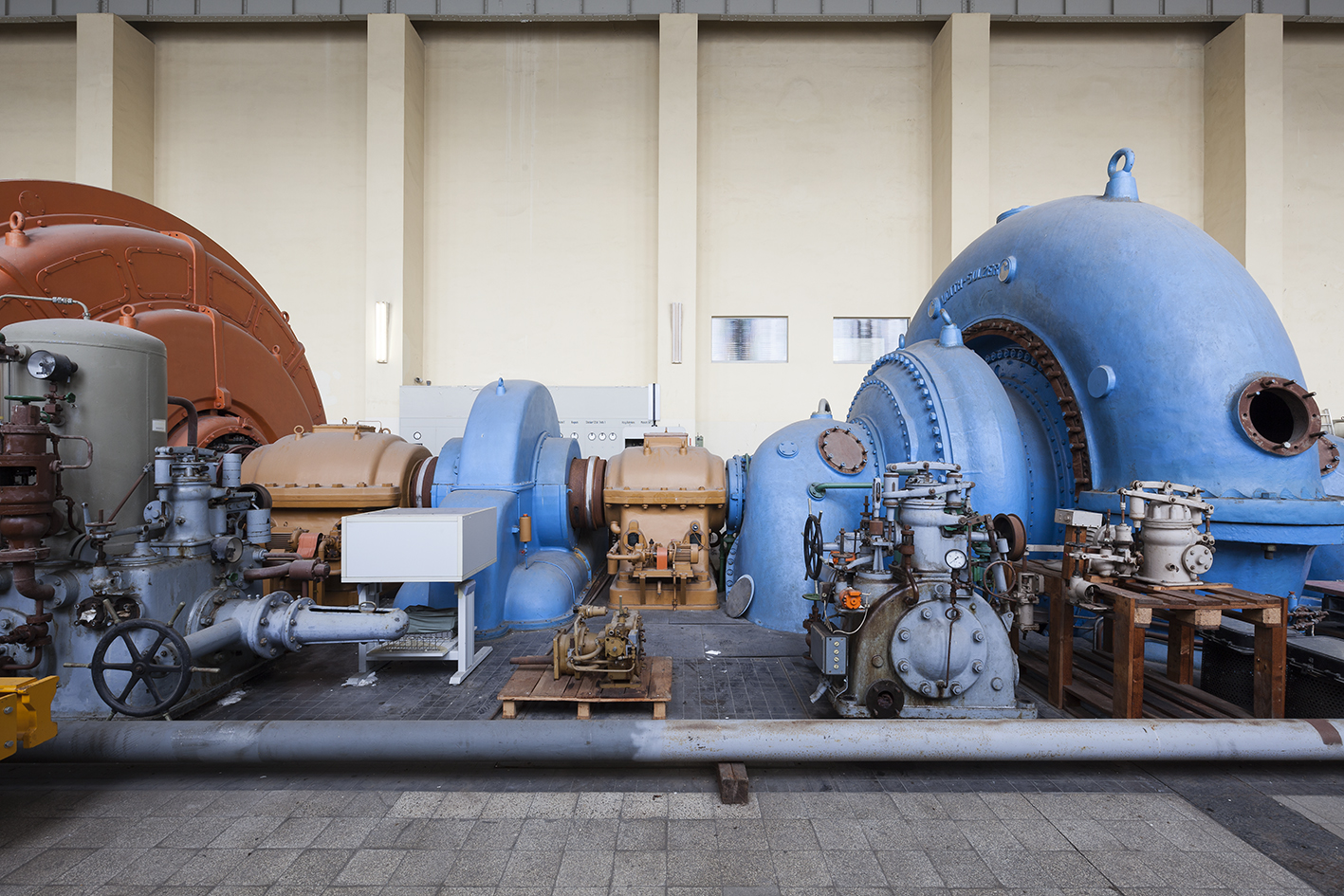 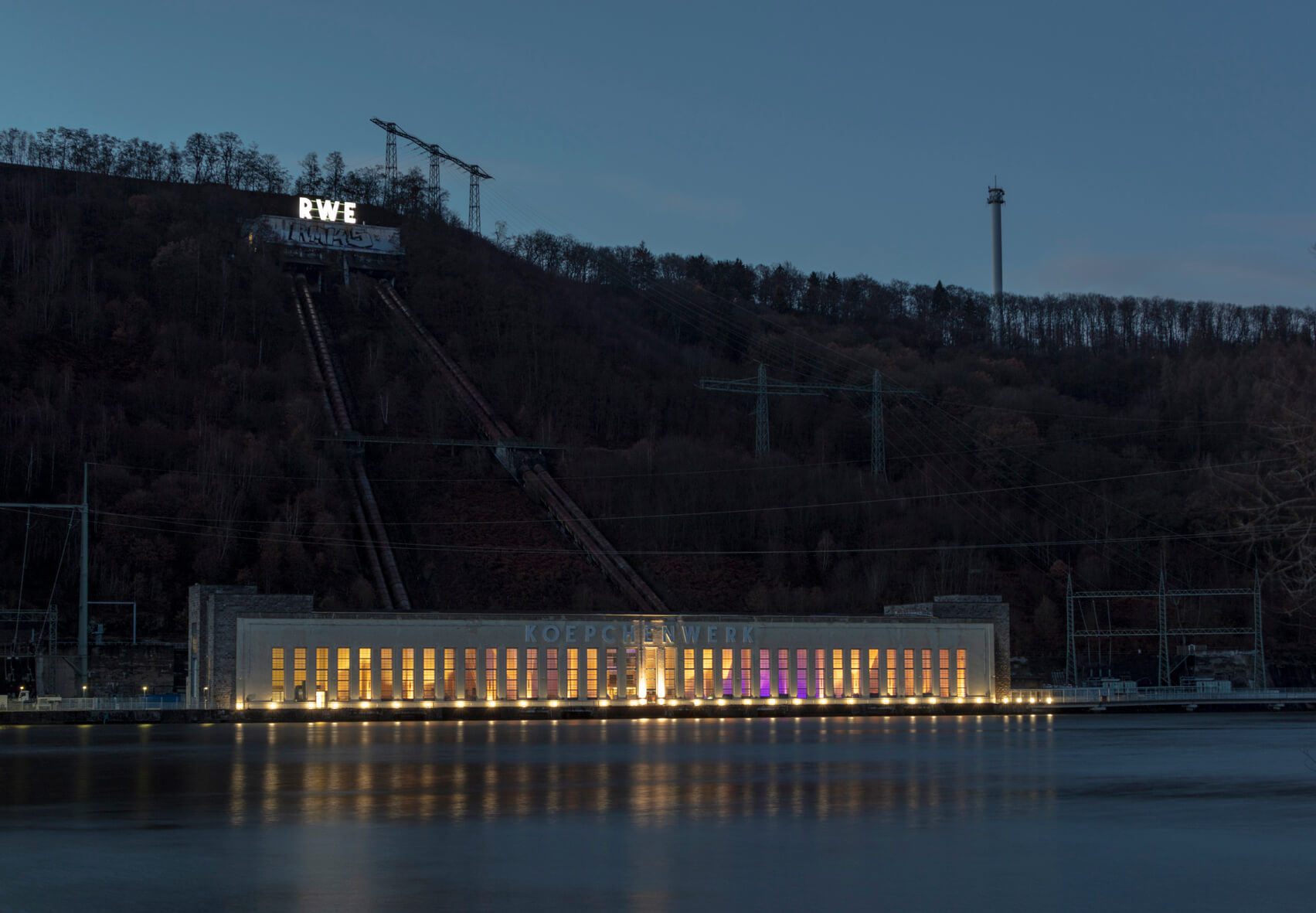 In 1930, Koepchenwerk went on stream with four machine units and 132 megawatt power. Provision of electrical energy during peak times was no longer a barrier. RWE considerably improved profitability and utilization of its coal-fired power plants and rightly celebrated operational startup as a technological milestone.

Koepchenwerk’s highlight: relief energy. In geoscience, this is understood as the height difference between the highest and lowest point of an area. RWE engineers took advantage of this difference to generate energy during peak times: if coal-fired power plants could not cover demand, Koepchenwerk was used. Water flowed on turbines from a reservoir located 160 meters over the lake Hengsteysee.

Outside of peak utilization – i.e. during night times when more than enough electricity was available in the RWE grid – the surplus was used to pump the water back out of the lake again into the higher positioned reservoir.

There was substantial damage in December 1980. Despite extensive repair measures, Koepchenwerk was now only usable to a limited extent. A year later, RWE top management decided to build a new, more sophisticated pumped-storage plant. It should be built right next to the old plant. Work started in 1985. Four years later, the new plant started up with 152 megawatt power. As a result, corporate management decided to take Koepchenwerk off the grid and it was shut down permanently on August 1, 1994.

Koepchenwerk has been under monumental protection since June 11, 1986. While RWE Power AG as owner considered the monument’s demolition due to lack of company interests, the association "Arbeitsgemeinschaft Koepchenwerk e.V." got involved for its preservation. Supported by the City of Herdecke, discussions started with the Foundation for the Preservation of Industrial Monuments, which took the high-profile monument into its ownership in 2016. The plant’s technical and structural condition has been maintained almost completely in its original condition. Numerous objects were able to endure. Starting with the historical machine hall, to the four pressure pipelines through to the gate valve house with the striking RWE logo, which is considered as the region’s landmark. The commando house of the machine hall and the four original machinery sets are still there, too. The latter consists in each case of turbine, motor generator, coupling and pumps, and enables interesting insights into engineering art of the 20th century. 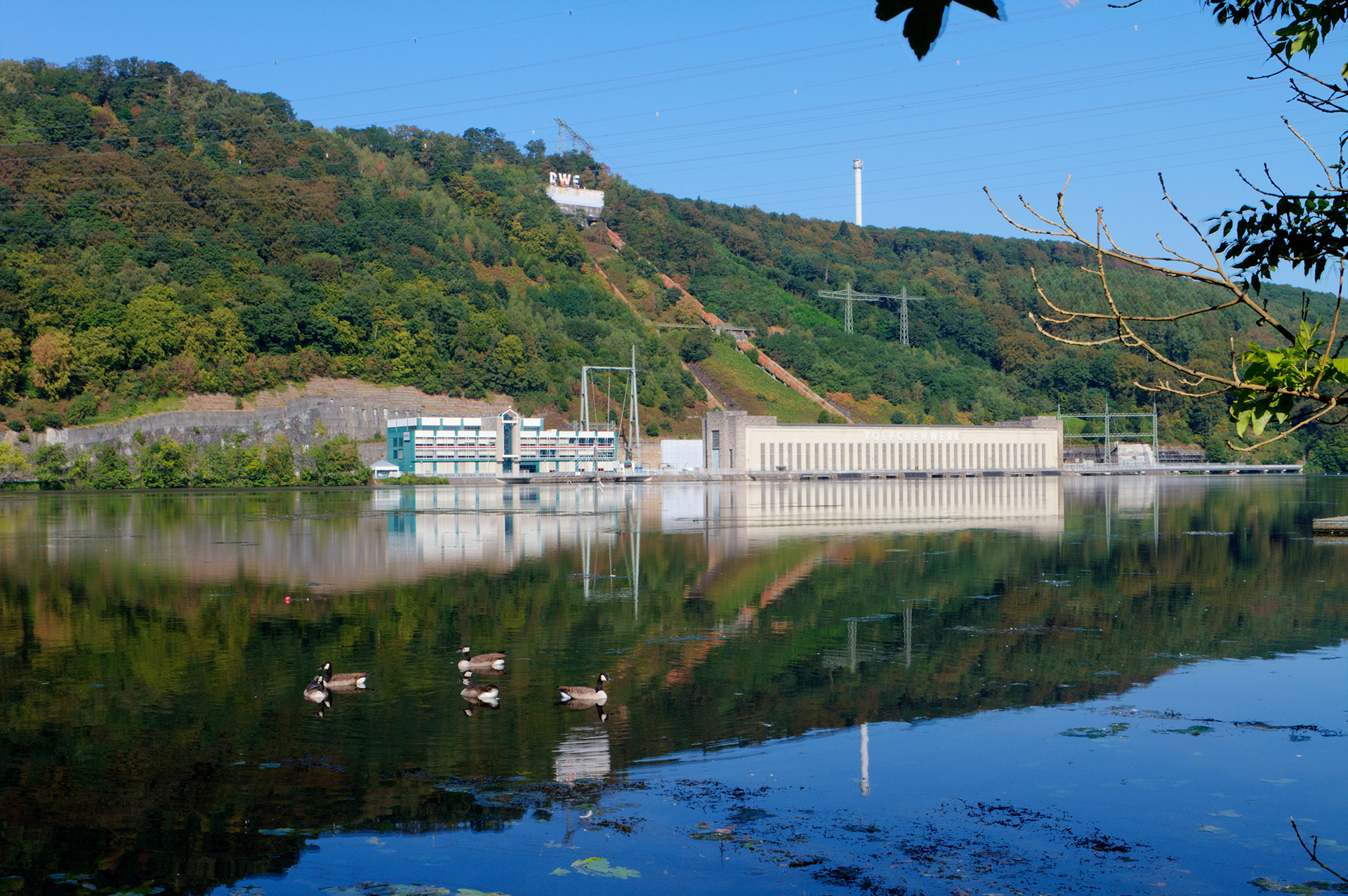 In close cooperation with the City of Herdecke, the Foundation for the Preservation of Industrial Monuments designed usage concepts for Koepchenwerk and examined options to integrate the plant into future leisure time and tourism offers. The Foundation is receiving active support from Ruhr Regional Association (Regionalverband Ruhr) (RVR) and AG-Koepchenwerk e.V. So the generation of energy in the former flagship plant may be standing still – but its history is still in a state of flux.